Know what to see, what to visit and what to do when traveling to Tetouan

Tetuan in Arabic means "the eyes" or "the sources." Sometimes known with the nickname "The white dove", is a city of the north of Morocco, located next to the Mediterranean. 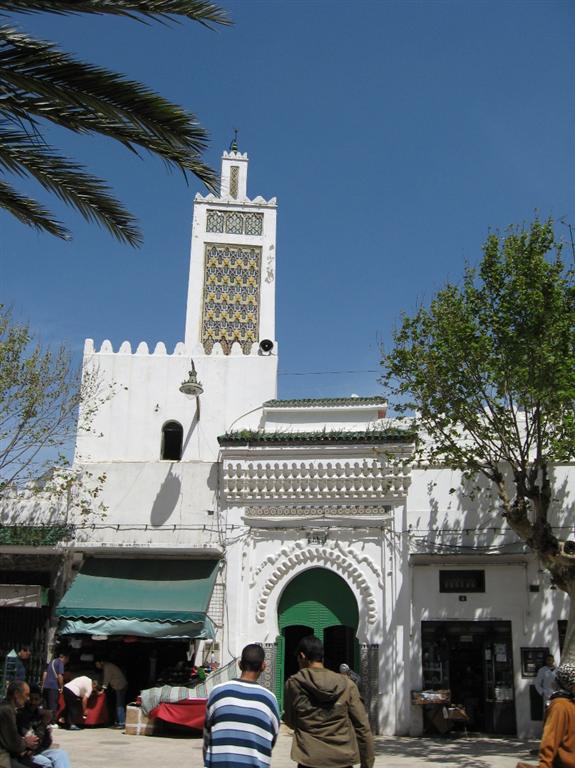 Tetuan, former capital of the Spanish Protectorate in Morocco, keeps the charm of the Spanish provincial towns. With the extension, the square of Mulay el Medí (formerly "Primo"), the church of Nuestra Señora de la Victoria, the Spanish casino, the post office building and the modernist and regionalist architecture of its facades in white and forge, Tetuan seems to have been submerged in a bygone era.

Traveling to Tetuan allows us to get closer to knowing part of that history of Spain, which has been so well reflected in the novel by Maria Dueñas, El tiempo entre costuras. In fact, as you walk through the extension, you almost miss the gossip gatherings in the Spanish circle or the ladies' tea in the cafeteria on duty. Passing through the church door, one almost expects one to hear the bells, which is no longer the case since 1956, when we left Tetuan to not return. Even so, there is still a Spanish presence through the Instituto Cervantes, the Spanish school Jacinto Benavente, the Vocational Training Center or the institute.

Including a visit to Tetouan on a trip through the north of Morocco is essential. Tetuán preserves one of the best preserved and most authentic medinas in the country, cataloged within Unesco heritage since 1997. With its narrow streets, arches, arches, gates, walls, mosques and small businesses, the Tetuan medina is a small jewel , Which even has its tanneries, where still today the leather is preserved and preserved with which they will then make handbags, slippers, purses, etc. The medina has five distinct districts, one of them being the Mellah or Jewish neighborhood, which has its own idiosyncrasy, with its houses with balconies and large windows, founded by the Sephardim who arrived here in their diaspora from Spain in the 15th century . The street of the lunette is the nerve center and commercial of the Jewish quarter.

Annex to the medina, we find the Palace of the King, former Palace of Jaliffa of the seventeenth century and seat of the Spanish High Commissariat during the protectorate, which opens to a large esplanade, old plaza or forum, remodeled and worthy of receiving the royal entourage and Its guard, scene of military stops and space of games for the tetuanís children when the king does not spend the night in the city. Of great sumptuousness, like all the real properties, it emphasizes this palace by its Hispanic Moorish style and to be in the nerve center of the city, affixed to the souk or market.

Tetouan is white, the white dove is called. From the road it looks out over the hillside that holds and holds it. Their houses cascade, white on the green background, are a picture worth seeing. Stand out on the hillside, standing out in the horizon, the towers of the old walled enclosure and the Alcazaba. Tetuán is a bustling city on market days, when small farmers come to sell their products, color of the land with full hands, product of the fertility of the valley and the aquifers that irrigate it.

But Tetuan is also rested, when evening falls the families with their children dressed in the sunday clothes, and the murmur of the muezzin is heard in the background, embraced by the breeze that comes from the nearby Mediterranean coast.

Discover the Medina of Tetouan, declared a World Heritage Site by UNESCO

Visit, if possible in the morning, the Craft House which is next to Bab Okla, really the building and gardens is wonderful.

Visit the Museo Arquológico, which only has a couple of rooms with a curious collection.

Visit the tanneries of Tetuan, to see how the skins are tanned and the work of leather goods is developed

Close to Tetouan there are wonderful beaches of the Mediterranean, which have nothing to envy to other famous beaches in Europe.

Next to Tetouan you have Martil which is a summer village with a magnificent sandy beach.

There is also Cabo Negro, a few kilometers from Tetuan

If you take the car to Nador along the coast you have numerous coves with a special charm and crystal clear waters.

There is also the beach of Marina Smir, summer resort of many ceutíes

Do not forget to look carefully if you go to a beach of rocks, because they are full of barnacles and you see that the Moroccans do not catch them, so you can pay a tribute to this delicious product of the sea.

It was founded in the 3rd century BC, destroyed by the Romans in the 1st century, for 200 years the legions used it as a military detachment.

It was not repopulated until 1307 when one of the Sultan Merinis decided to build a fortified city on the current site of Tetuan.

The city was destroyed in 1339 by the King of Castile and was not again occupied until the 16th century by some Jews from Spain. The Spanish blocked their port to avoid piracy and entered a stage of decline that did not cease until the time of Mulay Ismail. Spain reconquered it in 1862 maintaining a certain influence in the city until in 1913, and with the protectorate they occupied it again.

That is why it has sometimes been said that Tetuán is the most Hispanic in Moroccan cities.