Souks and markets in Morocco 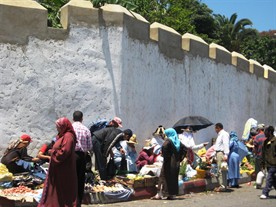 Souks and markets in Morocco

Today, every small population of Morocco enjoys a souk at least one day a week. If the population is larger, souks have two days a week.

Al Souq farmers come down from the mountains, butchers, fishmongers and more or less the same kind of people riding positions in the markets of our cities. It's where the freshest food and all products not easily found in stores are purchased. To these souks also come hairdressers, dentists, prophets, futurists, clerks and everything you can imagine.

In the cities of a Morocco market consists of a set of souks, which always appear around the mosque, and in a cluster of streets where artisans meet for trades.

In the souks, they are grouped because of the products they sold. Unlike medieval Europe, it was not common for merchants to live  in the upper floor of the stores.

Luxury products and household goods were located closer to the mosque thnt artisans (dyers, potters, metal work, ...) and they were less bothersome. Part of the souk was reserved to trade in imported objects and luxuries such as precious metals, silks, jewelry, ... this area is called alcaicería and was located in an enclosure that had its own doors.

The union of the souks with the mosque exerts a powerful attraction. Most pedestrian traffic running through the streets to the gates of the city, have souks developed in these areas