Grand Tour to Morocco 7 days from Casablanca to Fez

GRAND TOUR OF MOROCCO FROM CASABLANCA TO FEZ. 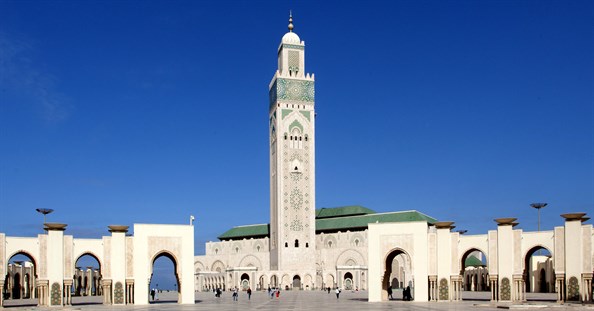 Casablanca, Morocco's economic and financial capital, is the country's most populous city, with more than 5 million inhabitants. It is located on the eastern coast of Morocco, bathed by the Atlantic.

Rabat, a modern yet traditional city, is one of the most important imperial cities in Islam. It has aFrench reminiscence of the times when Morocco was a French protectorate. It is known as "the city of gardens".

Marrakech is an Imperial city, an honor it shares with Fez, Rabat and Meknes, which determines its rich heritage and cultural variety. Marrakech is an authentic place, a city full of contrasts, colours and above all, full of life. You only have to walk through its souk to be captivated.

Discover the oases and kasbahs of southern Morocco. Perfect to disconnect from the day to day life.

Sahara, reach the majestic dunes of Merzouga and immerse yourself in them. Take a sand bath in an impressive environment. Live the night in a tent like a Berber and in the morning you can watch the sun rise over the dunes on the back of a camel.

Fez is one of the oldest universities in the world. The immense Medina de Fez is considered to be the largest pedestrian area in the world, and the means of transport used as a rule within the medina is the donkey and the cart. It is also famous for its tannery where the tanning and dyeing of skins, the raw material of the famous leather goods, is done.

Travelling to Morocco on the Grand Tour departing from Casablanca is a unique experience.
Need more information? Call us on 954 224 241!

Price per person
(In double room)

GRAND TOUR OF MOROCCO FROM CASABLANCA TO FEZ

The expected hotels are subject to change due to majeure force, maintaining a similar or higher category.

IT IS MANDATORY THAT YOU BRING YOUR CURRENT PASSPORT WITH AN EXPIRATION DATE OF AT LEAST 6 MONTHS FROM YOUR TRIP.

There will be no departure on 25 May 2020 as it coincides with the end of Ramadan.