Know what to see, what to visit and what to do when you are traveling in Chefchaouen

Chefchaouen appears at last after a curve. Flanked by two horns (meaning its name), the city is embedded in a valley surrounded by the high mountains of the Rif. Medieval is its layout, the physiognomy of its Andalusian people, and its past saint. In Chaouen the blue unfolds the whole palette of shades, confusing its horizon with the sky. And in the square of Uta al-Hammam, with a tea in your hand and the aroma of mint in the breeze, a longing seizes us, that time will stop to erase from our memory this magical place.

"This mountain is the most pleasant of all that are in Africa".

We found a city with many craftsmen and merchants. It is the residence of a lord who rules over many tribes of these mountains. It was he who began to stimulate the development of this country ... is called Sidi Berrased (Benrashid). He made an incessant war against the Portuguese.

The inhabitants of the city and those of the mountain do not pay any taxes to the lord because the majority are his soldiers, on foot or on horseback.

Chefchaouen, Chaouen, or Xauen, Chefchaouen Chefchaouen, all these names serve to refer to a magical village, located in the Rif mountains.

Its name takes it from the surrounding mountains, Yebel Kelaá and Yebel Megu, which signify the horns. The X was put by the Spanish protectorate.

Its unpredictable streets, painted with indigo blue to drive away the mosquitoes are the ideal place to walk and contemplate the wonder of town that you have before your eyes.

It is the quietest place in northern Morocco, where I learned "bad hurry friend, hurry kills" and the truth is that they are right. It is better not to rush into this city. You can spend hours savoring the famous tea with mint, sitting on a terrace of the square and not even give notice of the passage of time.

It is the quietest place in northern Morocco, where I learned "bad hurry friend, hurry kills" and the truth is that they are right. It is better not to rush into this city. You can spend hours savoring the famous tea with mint, sitting on a terrace of the square and not even give notice of the passage of time.

It is two hours by car from Ceuta and two and a half from Tangier. History of Chefchaouen.
Chefchaouen founded it in the year in 1471 Mulay Ali ben Rachid as base from which to send troops to the battle against the Spaniards and Portuguese in Ceuta.

It prospered with the arrival of sefardíes and moriscos expelled from Spain in 1492 by the catholic kings. And these were the ones that gave him the architectural look that Chef Chaouen has today, the houses and doors painted them green.

The indigo blue touch came from the hand of the Jews who introduced it in the country back in the year 1930.

The city was isolated, in it could not enter strangers and much less Christian, until the year 1920 date in which it was occupied by the Spaniards. Between the years 1924 and 26 the rif war was declared, but finally the Spanish returned to be implanted in this city until the independence of 1956.

The Alcazaba of Chefchaouen

It is of the XV century and is completely restaruada thanks to the Ministry of Culture of the Junta de Andalucía. In his prisons the leader Abd el Krim was arrested in 1926, during the Spanish protectorate. The kasbah of Chefchaouen was built by Ali Ben Rachid in 1471. The main tower was incorporated at the end of the 15th century and the residential part of the north-west wing is from the 18th century. Today the Alcazaba can be visited and it houses an Ethnographic museum.

The medina of Chefchaouen

The color of their houses is especially attractive. It is formed by a labyrinth of unpredictable alleys. Many of them have no way out. It is a safe, quiet and wonderful place to walk around.

La Plaza of Uta the Hammam of Chaouen

Irregularly and dominated by the peaks of the mountains surrounding Chaouen. In it is the Great Mosque, which is of the XV century and its minaret is hexagonal and finely decorated.

It is in the lower part of the city, at the entrance. It has a special activity on Mondays and Thursdays that are market days. He comes to the rifeños to sell their products.

The sinks of Chefchaouen

They are next to the birth of the river and still today still in use as public laundries. Up there women go down to wash or wash some other carpet every day.

After passing Bab Onsar we will cross the bridge of Kantara, from where we will be able to admire the women rifeñas doing the laundry in the lavederos.

Around the area there are flour mills that were propelled by the force of water now converted into most cafes, you can enjoy a tea to the mint while relaxing one listening to the flow of the agual.

This square is next to the minaret of the mosque that gives its name to the neighborhood. It is an urban space of great beauty open to the east and with views over the river the bridge and the mountains that dominate the city.

If you walk from Ras el Maa to the south you can take a nice walk to the top of the mountain where the Spanish mosque is. This mosque was built before the Rif War but the Chaounies did not want to use it and ended up in ruins. It has been restored recently but is still not open to prayer.

At dusk the place is full of people. It is one of the few mosques in which you can enter. I recommend climbing up to the minaret from where there is an excellent view of Chefchaouen. 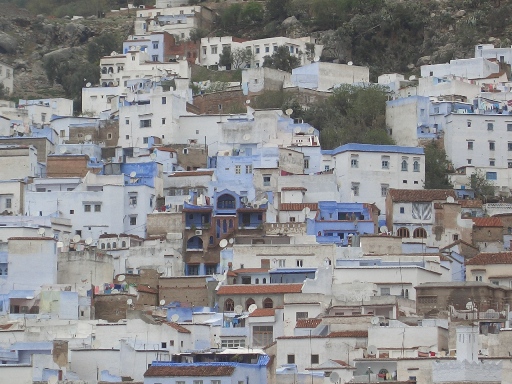 Near Chefchaouen, half an hour by car you will find the Mediterranean coast of Morocco where there are beautiful unspoiled beaches.

The first one is Oued Lau, but there are others that are also worth visiting as Targha or Stehat. 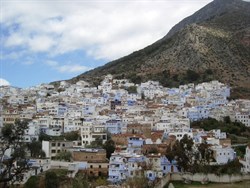 Chaouen was founded as a military site, whose mission was to defend the interior of the country from the attacks of Portuguese and Spanish, who were seizing the Moroccan coast. The city of Chaouen was founded by Hassan Ben Mohammed el Alami with the aim of using it as a secret place from which to attack the Portuguese who occupied Tangier and Asilah.

Chefchaouen Had also the function of hosting and place of refuge and where to settle for all Muslims who were leaving Spain as they advanced the Catholic kings in the fifteenth century.

These Muslims build houses according to the style of the city in which they lived in Spain, giving an Andalusian aspect to the city.

In Chefchaouen the entry of foreigners and Europeans for a long period was prohibited, until in 1883 Chefchaouen Charles de Focauld entered, where he stayed for only one night.

In 1920 the Spaniards took the city and had it in possession until the year 1956 when Morocco obtained the independence.

Casa Hassan, next to the square, another place with very good food at a good price

The Bar, has menus of the day, and most important, also sells beers

Jebli, in the square of Uta el Hammam